Krishna Rajagopal is the Dean for Digital Learning. He leads efforts to empower and catalyze MIT faculty as they use digital technologies to augment and transform how they teach students at MIT and, via MITx' open online courses and MicroMasters programs and via MIT's Open CourseWare, to share the best of MIT knowledge and perspectives with learners around the globe. He is also the William A. M. Burden Professor of Physics.

Rajagopal’s theoretical physics research focuses on how quarks — ordinarily confined within protons and neutrons — behave in extraordinary conditions such as in the hot quark soup that filled the microseconds-old universe. This liquid was the earliest, and is in a sense the simplest, complex form of matter and as such forms a testbed for understanding how a complex world emerges from simple underlying laws. Rajagopal's work links nuclear and particle physics, condensed matter physics, astrophysics, and string theory.

Rajagopal joined the MIT faculty in 1997, with degrees from Queen’s University and Princeton, after stints at Harvard and Caltech. He is the author of more than 100 papers and was elected a fellow of the American Physical Society in 2004. He serves on the U.S. Nuclear Science Advisory Committee and is a regular visitor at CERN and Brookhaven National Laboratory, where droplets of hot quark soup are recreated in ultra-high-energy collisions, little bangs that recapitulate the big bang.

At MIT, he served as the associate head of the Department of Physics, where he stewarded the department’s undergraduate and graduate educational programs and helped to launch its early MITx activities that improved the on-campus teaching of freshman physics and junior lab as well as its first MOOCs on quantum mechanics and quantum field theory. He is a former Chair of the MIT Faculty and a Margaret MacVicar Faculty Fellow, and he has won the Everett Moore Baker Award for Excellence in Undergraduate Teaching in 2011 and the Buechner Prize for Excellence in Teaching in 1999. 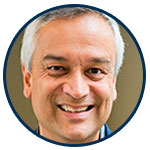